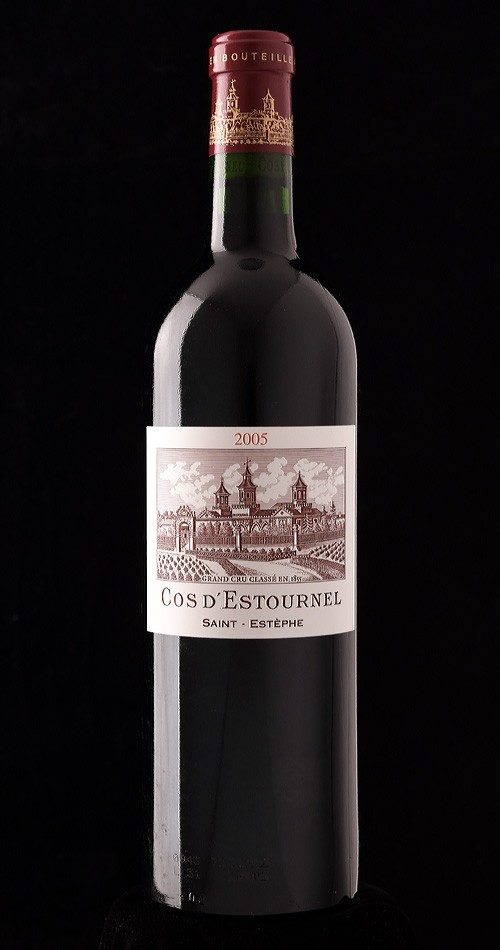 "The 2005 Cos d'Estournel is blended of 78% Cabernet Sauvignon, 19% Merlot and 3% Cabernet Franc. Deep garnet colored, it is still a little closed and youthfully shy. With coaxing, the nose is just beginning to offer glimpses at vivacious kirsch, red roses, violets, licorice and mocha scents over a crème de cassis, blackberry pie and chocolate-covered cherry core with wafts of chargrill, mossy bark and truffles. Full-bodied, concentrated and wonderfully complex in the mouth, the palate is just beginning to reveal the true potential of this wine, with tightly wound layers of perfumed black fruits and earthy notions bound by a rock-solid frame of firm, grainy tannins and finishing with epic persistence. This still needs 5-6 years, but I love how this beauty is shaping up!!"

"While I am not convinced the 2005 Cos d’Estournel will eclipse the compelling 2003 Cos, it is unquestionably another superb classic from proprietor Michel Reybier and his brilliant winemaker, Jean-Guillaume Prats. Made from an unusually high percentage of Cabernet Sauvignon (78%) and the balance mostly Merlot with a tiny dollop of Cabernet Franc, this superb effort requires plenty of time in the bottle. It boasts an inky/purple color as well as a glorious perfume of licorice, Asian spices, creme de cassis, blackberries, and toasty oak. This full-bodied St.-Estephe is exceptionally powerful, pure, and dense with a layered mid-palate that builds like a skyscraper. While there are massive tannins, they are remarkably velvety and well-integrated in this big, backstrapping effort that should enjoy an unusually long life. Forget it for 8-10 years, and drink it between 2017-2040."

"There have of course been great vintages since 2005, but the top examples from this year could be the greatest wines of the past two decades. The 2005 grapes were near perfect during the growing season, with flowering completed in three days, followed by similarly smooth and quick colour change and a harvest that finished on 9 October – a touch earlier than many of the neighbouring estates. The percentage of Cabernet Sauvignon in the blend is among the highest ever at this château. It tastes much younger than the 2004 vintage right now, as you would expect, but it's the rich and complex layers that really express the quality. It has the sense of cramming a handful of fruit into your mouth straight from the hedgerow, with cassis and crushed blackberry flavours. The tannins are soft but doing their job, with wonderful layers of liquorice and slate. Brambly, cheerful and effortless, there's an almost wild side to this wine, both free-flowing and more than living up to its reputation. Good luck trying to predict when this wine will reach its end."

"This just keeps getting better and better as it slowly works its way to maturity. The wine is deep, full-bodied, concentrated and multi-faceted. The gorgeous fruit is perfectly ripe, sweet, round, opulent and fresh. Still youthful, give it 7-10 years and this will be a rockstar wine with all its sensuous textures accompanied by complex aromatics and a long finish, perfect to show off its purity and poise."

"The 2005 Cos d'Estournel is a vintage that I have encountered several times over the years. Here, as part of a 2005 horizontal of the top Bordeaux, it mirrors previous bottles. It has a tightly-wound bouquet at first with blackberry, scorched earth, juniper and hints of leather. More backward that its peers and clearly requiring another three to five years or an extremely long decant. The palate is robust, masculine, dense and yet comes with fine tannins and plenty of energy. It has a precision that derives from its propitious terroir and yet there is no question that it needs 15, perhaps 20 years before it will reach its drinking plateau. Tasted at the Goedhuis's 2005 Bordeaux pre-dinner tasting at the Savoy in London."

"I have been fortunate to taste the 2005 Cos d'Estournel three times in recent weeks and it has never been anything less than stunningly beautiful, as it is once again on this night. The interplay of dark, ripe fruit and the more mineral, savory-inflected nuances typical of Saint-Estèphe yield a compelling, wonderfully complete Bordeaux that simply has it all. An exotic mélange of graphite, gravel, smoke, cured meats and dark-fleshed fruits flow through to the explosive finish. Riveting today, the 2005 Cos will continue to thrill those fortunate enough to own it for several decades. Given its price vis-à-vis many of the high-flying wines of the year, the 2005 Cos remains a terrific relative value in its class."

"Good ruby-red. Knockout nose combines currant, plum, minerals, licorice and graphite. Wonderfully sweet, rich and deep, but with near-perfect balancing acidity to frame the wine's lush fruit. This superb 2005 has it all. Finishes with noble, sweet tannins and palate-saturating persistence. On my most recent visit, Prats told me he considered 2005 to be superior to the 2003, and that the '05 may be "our best wine ever."