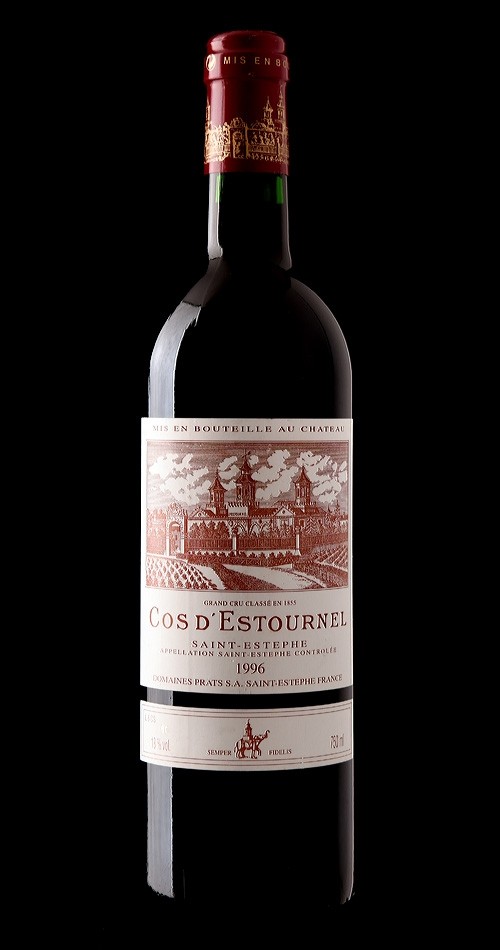 „Tasted at the château, the 1996 Cos d'Estournel was aged in 65% new oak (unlike the 1995 which was 100%) and is a blend of 65% Cabernet Sauvignon and 35% Merlot. It has a straight down the line, intense and focused, graphite and melted tar bouquet. It is almost Pauillac in style, no surprise given its proximity. The palate is medium-bodied with fresh acidity, finer tannin than the 1986 Cos d'Estournel tasted alongside, but sharing those same leitmotifs of black pepper and sea salt. I like the nonchalance of this Cos d'Estournel. At 20 years it is not an ostentatious wine, not determined to go out and impress, but its nuance, stylishness and classicism grow on you. Its virtues seem to register only after you swallow the wine and find yourself tempted back for more. Excellent.“

„Made from 65% Cabernet Sauvignon and 35% Merlot, this is a huge, backward wine. The 1996 possesses an opaque purple color, as well as pure aromatics consisting of cassis, grilled herbs, coffee, and toasty new oak. Massive in the mouth, and one of the most structured and concentrated young Cos d'Estournels I have ever tasted, this thick, structured, tannic wine has closed down significantly since bottling. It requires 7-8 years of cellaring, and should last for 30-35 years. It is a fabulous Cos, but patience is required. Anticipated maturity: 2006-2030.“

„A fabulous Cos d'Estournel, along with the 1995, the 1996 is the finest wine produced at this estate since the sumptuous 1990, and it represents the essence of Cos d'Estournel. From its saturated black/ruby/purple color, to its knock-out nose of Asian spices, licorice, tobacco-tinged cassis fruit, and plum-like jam, this full-bodied, extraordinarily pure wine will enjoy an immensely impressive future. Approximately 66% of the crop made it into the final blend, which includes a slightly higher percentage of Cabernet Sauvignon than usual (65% Cabernet Sauvignon and 35% Merlot). While the 1996 is similar to the 1986, the fruit and tannin in the former wine are sweeter and more abundant. It is a massive example of Cos, but neither heavy nor overbearing in view of its immense size. Anticipated maturity: 2005-2035. Both the 1995 and 1996 vintages of Cos d'Estournel were even more impressive in late 1997 than earlier in the spring.“

„Another gorgeous wine has been produced at Cos d'Estournel. Normally, Cos is a blend of 60% Cabernet Sauvignon and 40% Merlot, but in 1996, largely because of the high quality of the Cabernet crop, the final blend was 65% Cabernet Sauvignon and 35% Merlot. This is one 1996 where I noted a close resemblance to the chateau's 1986. This powerful, tannic wine exhibits a black/purple color, gorgeously sweet, chewy, thick fruit, medium to full body, and 30+ seconds of length. Although backward, the wine is impressive because of its purity, richness, and overall size. I suspect the 1996 Cos d'Estournel, much like the aforementioned 1986, will require 8-10 years of cellaring; it should keep for 30-35 years. Proprietor Bruno Prats informed me that in 1996 66% of the crop made it into the final blend.“

„The aromatics capture the wines mature essence with its earthy wet forest floor, tobacco leaf, cigar box and bright red fruits. There is lift in the fruit, coupled with a leafy, red berry assortment in the finish. This is probably close to fully mature, where it should remain for at least 15 or more years before entering its slow decline.“

„The nose is already developed, as you find smoke, tobacco, cigar wrapper, cassis and a touch of green. But it's easy to move past the green notes, as there is so much to like about this wine. Full bodied, concentrated, and loaded with Asian spice, red fruits and wet earth. This is showing most of what it has today, but it could get better from here.“

„What a difference this was compared to the previous bottle I tasted. This delicious St. Estephe produced from a blend of 65% Cabernet Sauvignon and 35% Merlot offers truffle, tobacco, wood, cassis, forest floor, Asian spice and blackberry with hints of mocha in the aromatics. Powerful, full bodied, round and classy, the wine is starting to enter maturity, ending in a long, spicy, black cherry and earthy finish. It's drinking great today, but in a few more years, it's going to be even better.“

„This combines sex appeal with power. It's a large scaled wine filled with ripe, spicy, black fruit. The tannins are round, allowing it to already show nicely. I'll hold mine for at least another decade.“